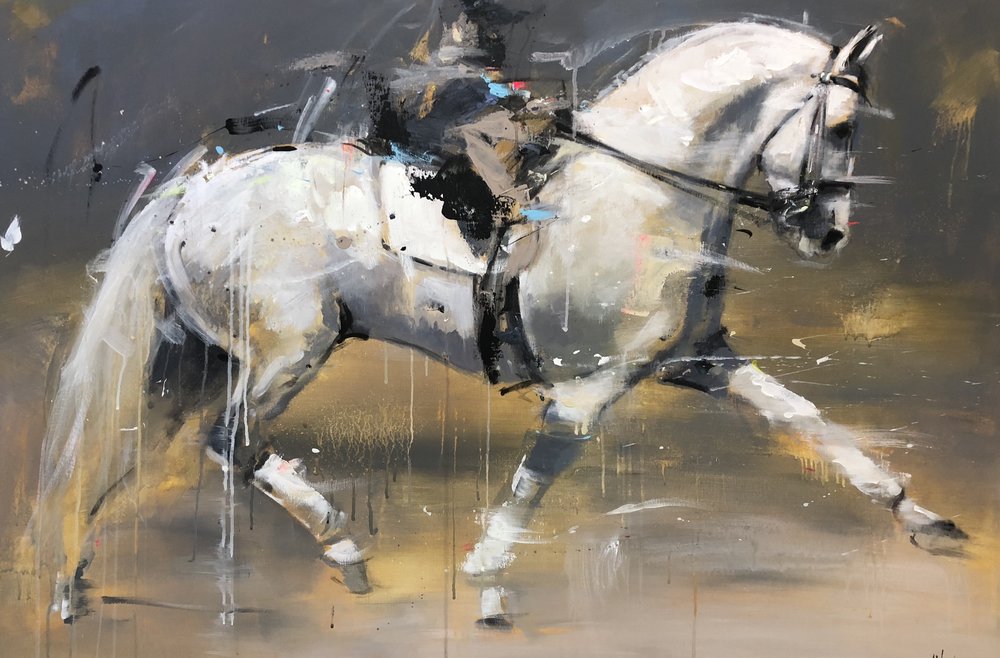 David Noalia considers the horse as an universal theme, an “essential” subject. The Sevillian painter has chosen to focus exclusively on purebred Andalusian horses, which have been closely linked to his hometown for thousands of years. Originally from the Iberian Peninsula, the Andalusian horse, beloved by David Noalia because of its extraordinary “elegance and power”, represents the essence of Spain at its best: passion, color and drama. These horses first appeared in Stone Age cave paintings about 30,000 years ago, Velázquez depicted them being ridden by the Spanish Royal Army during the 17th century. There is also a personal connection for David: “As a child, I was dazzled by the magnificent horses that adorn the fairs and festivals of Seville, including the Feria in April and the Romeria de El Rocio, a Pentecost pilgrimage in June that attracts millions of tourists”.

Unlike other animals such as bulls or beasts, the horse is also special because it is dominated by a rider. But the artist has chosen to focus only on the animal: “When it comes to reproducing it, the rider is impersonal, there are reins that mark the domination, but the figure of the rider is almost imperceptible. I paralyze the image, I concentrate on one point and I deconstruct the snapshot: when you reach the rider, the figure is already decomposed”.

David begins a painting by studying films of horses in motion, stopping at the moments that interest him most and developing a drawing from there. “I like to use the latest technology, but at the same time I love to paint like the old masters.” In addition to quoting legendary Spanish artists such as Sorolla and Velázquez, David also praises the “freshness of Gerhard Richter”. Pushed to expand on this subject, he emphasizes the German painter’s abstract qualities, his “expressive use of color…”. and] his courageous and energetic brushstrokes”.

In his work, figuration and abstraction coexist, the first as a base, the second as an aspiration. This conversation between both planes is in continuous friction, because as soon as the eye recognizes the figure, the balance shifts to it, but the vocation to insinuate and evoke through traces and spots in a nebula that contains the whole always survives. “It is a work very much  close to our culture, to a contemporary custom “, expresses David Noalia, who also attributes  to his work expressionist and impressionist features.

David’s works are characterized by flashes of color, which are added near the end of the process. “This is the moment when I abandon logic,” he admits. “My technique becomes spontaneous, impulsive. Courage and creativity take over, as well as the need to express an authentic way of being, feeling and thinking”.

In his career, he needed a long time to acquire the knowledge and skills to work in this way, although today he says it’s intuitive and these physical gestures are an essential part of a finished painting. It’s, he says proudly, “an orderly mess”.