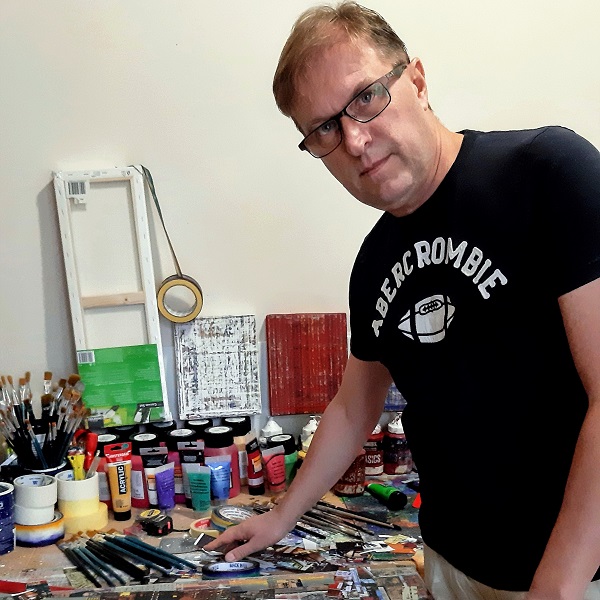 Christoff Steli (b. 1964) is internationally renowned for both his abstract and pop-art artworks.

Very soon after graduating in 1993 from the National Academy of Fine Arts in Sofia, Bulgaria, Steli starts to be displayed in various galleries worldwide.

His pop-art artworks are collected under the name “Urban Poetry”. The “City series” is a collection of stylized flowers, hearts or purely geometric compositions with metaphorical, poetic and lyrical meaning. The works are inspired by the Artists’ travels to world-famous metropolises such as Paris, New York and London.

The collages are symmetrical patchworks of found tickets, postcards, stickers, flyers, self-captured photographic fragments and other printed materials from a particular urban environment. They take the viewer on a journey through street names, shop windows, famous landmarks and much more. It is Steli’s goal to not only reveal the mood of the present, but also tell the past and history that the chosen setting is breathing. He is inviting the spectator to reflect about and discover the magic of their own environment.

Steli’s abstract artworks are collected under the name “Light” and are inspired by the essays of Kandinsky, in particular by the theory of the immaterial aspects in painting. Color is an instrument, not a means of expression. It is a universal language, one that lends itself to various translations.

The Artist is mirroring his vision on life and personal experiences by using adventurous and colorful combinations of lines; color and light contrasts; and elementary geometrical forms.

The artworks entirely envelop the meaning of the term “Light”: from its physical meaning, where light is perceived by the eye as color, to the mystical and spiritual meaning of light. A specific technique (epoxy resin) is used to isolate the painting layer and create a kind of a “distance” between the viewer and the surface of the canvas, just as light can be seen but cannot be touched.

Christoff Steli’s work is now exhibited in several galleries in Europe and Canada and is in the collection of the New Bulgarian University and the National Gallery of Fine Arts in Sofia, Bulgaria.